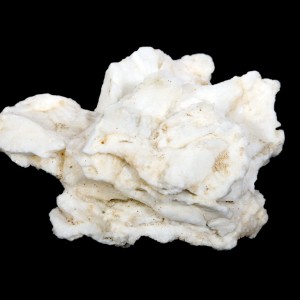 MINERALOGY, PROPERTIES, OCCURRENCE: Glauberite [sodium calcium sulfate, Na2Ca(SO4)2] crystallizes in the monoclinic system as tabular or prismatic, steeply inclined, wedge-shaped, dipyramidal crystals.  Because many other evaporite minerals replace glauberite, it is one of the most widely pseudomorphed of all minerals.  Glauberite has a Mohs hardness of 2.5-3.0, perfect cleavage in one direction, a vitreous luster that is often covered with an efflorescent coating, and a specific gravity of 2.7-2.8.  It is transparent to translucent and colorless; crystals with efflorescent coatings are white.  Glauberite is sedimentary in origin and forms primarily as an evaporite mineral in marine and lacustrine deposits.  Small amounts of glauberite also occur in basaltic vugs and low-temperature hydrothermal veins.

METAPHYSICAL PROPERTIES, LORE, USES: Glauberite and other sodium-sulfate-containing minerals are mined as a source of sodium sulfate for use in the manufacture of paper, glass, and detergents.  Glauberite has no use in jewelry because of its softness, solubility in water, and tendency to effloresce.  Glauberite has no metaphysical significance.

COLLECTORS’ INFORMATION: Glauberite is popular among collectors for its distinctive crystal shapes and pseudomorphic forms.