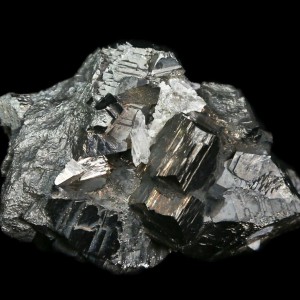 HISTORY, NAME, LOCALITIES: Arsenopyrite, pronounced arr-sen-oh-PIE-rite, has since antiquity served as a source of the element arsenic.  Its name was assigned in 1868 as a contraction of the traditional term “arsenical pyrite,” referring to any arsenic-bearing, sulfide mineral generally similar in appearance to pyrite.  Arsenopyrite, the most abundant arsenic-bearing mineral, is widely distributed with important sources located in China, Russia, Namibia, Morocco, Australia, Peru, Bolivia, and the United States (Wisconsin, Arizona, Nevada, Colorado, Idaho).

MINERALOGY, PROPERTIES, OCCURRENCE: Arsenopyrite [iron arsenic sulfide, FeAsS] crystallizes in the monoclinic system as distinct, prismatic crystals with diamond-shaped cross sections and dome-shaped terminations.  It is opaque with a bright, metallic luster.  Its silver-white to steel-gray color tarnishes to dark gray.  Arsenopyrite has a Mohs hardness of 5.5-6.0, distinct cleavage in one direction, and a specific gravity of 5.9-6.2.  It occurs most commonly in hydrothermal veins in association with such minerals as quartz, pyrite, and chalcopyrite.  Arsenopyrite is toxic because of its arsenic content; never heat or crush arsenopyrite, and always wash hands after handling specimens.

METAPHYSICAL PROPERTIES, LORE, USES: Arsenopyrite is one of the few common minerals that have not acquired metaphysical significance, probably because it contains the “dark” element arsenic.  It is a former ore of arsenic.