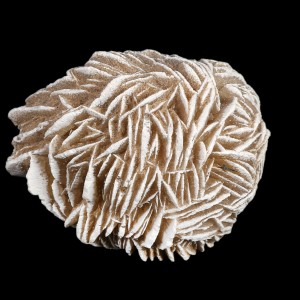 Lovely desert rose is an evaporate that is formed by the elements water , wind and sand and is white to beige in color. The desert rose is  a form of selenite. Known by many names, such as sand rose, rose rock, selenite rose, gyspum rose, and gypsum rosettes. Desert roses are most commonly comprised of two minerals, selenite (gypsum) and/or barite.

Selenite from the Latin, selenites, Greek, selene literally translating to “Moon”. Ranges from transparent to pearly luminosity, is an evaporate that has 4 varities of the mineral gypsum, selenite, satin spar, desert rose and gyspum flower.

HISTORY, NAME, LOCALITIES: Gypsum, pronounced JIP-sum, is hydrous calcium sulfate.  Its name stems from the Greek gypsos, or “plaster,” alluding to one of its early uses.  Selenite, pronounced SELL-en-ite, is the crystalline variety of gypsum.  Its name is derived from the Greek selénités, literally “stone of the moon” (from seléné, or “moon”), referring to the moon-like, pearly luster of its cleavage surfaces.  Collecting localities are found in Canada, Peru, Mexico, Spain, and the United States (Oklahoma, Utah, New York, Tennessee, and Nevada).

MINERALOGY, PROPERTIES, OCCURRENCE: The selenite variety of gypsum [hydrous calcium sulfate, CaSO4·2H2O] crystallizes in the monoclinic system as prismatic or bladed crystals with distinct rhombic form, and as arrowhead-shaped twins with beveled edges.  Pure selenite is colorless or white, but impurities create a range of pale grays, yellows, reds, and browns.  Selenite is transparent to translucent with a hardness of 1.5-2.0, perfect cleavage in one direction, vitreous to pearly luster, and a specific gravity of 2.3-2.4.  It occurs mainly in chemical-sedimentary, marine-evaporite formations of sandstone, limestone, or rock salt.

COLLECTORS’ INFORMATION:  The most collectible selenite crystals have water-clear transparency, a range of pale colors, and well-developed, rhombic crystals.