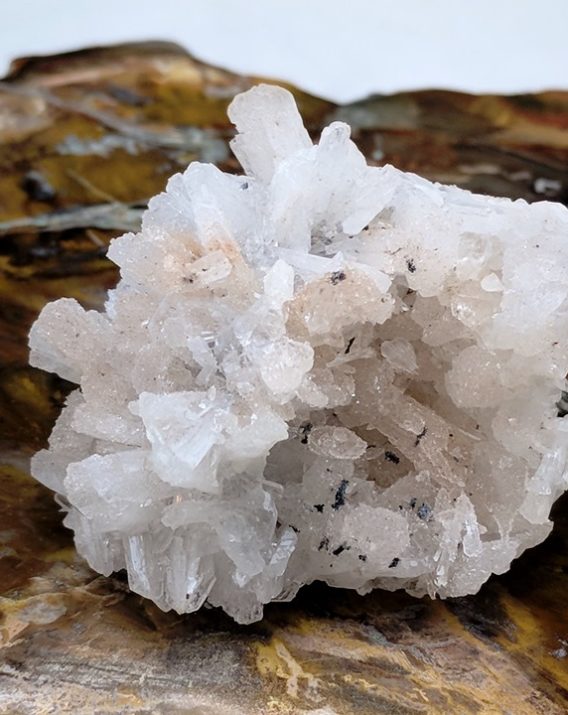 This specimen has excellent crystal structure.  It will make a wonderful addition to any mineral collection.

As you study the photos, note first that the hemimorphite crystals are colorless, which indicates a high degree of chemical purity.  If the hemimorphite is on matrix, it consists of orange-brown limonite, along with dark-brown goethite.

This orange-brown to dark brown matrix is an identifying characteristic of virtually all oxidized-mineral specimens from the Ojuela Mine.

For study and display purposed, hemimorphite is popular among  mineral collectors for its two distinct, hemimorphic habits and the scarcity of good specimens.

According to modern metaphysical beliefs, hemimorphite enhances self-esteem and self-respect, facilitates personal evolvement, protects against malice, and brings joy and creativity to life.

HISTORY, NAME, LOCALITIES: Hemimorphite was recognized as a mineral species in 1832 and was originally known as “calamine.”  In the 1930s, it received its current name, which consists of the root works “hemi-,” from the Greek hemi, or “half,” and “morph,” from the Greek morphe, meaning “form,” and literally means “half form,” alluding to its hemimorphic tendency to form asymmetrical opposite crystal terminations.  Although uncommon, hemimorphite occurs in small quantities at most oxidized zinc deposits.  Notable collecting localities are in China, Australia, Italy, England, and the United States (Montana, New Mexico, Idaho, New Mexico, New Jersey).

MINERALOGY, PROPERTIES, OCCURRENCE: Hemimorphite [basic hydrous zinc silicate, Zn4Si2O7(OH)2·H2O], pronounced hemm-ee-MORF-ite, crystallizes in the orthorhombic system as flat, elongated, striated, bladed crystals or botryoidal crusts.  Crystals are hemimorphic, exhibiting different habits at opposite terminations.  It has a Mohs hardness of 4.5-5.0, perfect cleavage in one direction, and a specific gravity of 3.4-3.5.  Pure hemimorphite is colorless, but impurities impart subtle hues of pink, yellow, blue, and green.  As a secondary mineral, it forms from the weathering of sphalerite in the shallow, oxidation zones of zinc-rich deposits.

METAPHYSICAL PROPERTIES, LORE, USES: Hemimorphite’s metaphysical properties include the ability to enhance self-esteem and self-respect, facilitate personal evolvement, protect against malice, and bring joy and creativity to life. Hemimorphite is a traditional component of the “calamine lotions” long used to treat skin conditions.  Hemimorphite was formerly an ore of zinc.

COLLECTORS’ INFORMATION: Hemimorphite is collected for its hemimorphic tendencies that produce unusual crystal shapes and the scarcity of good specimens.