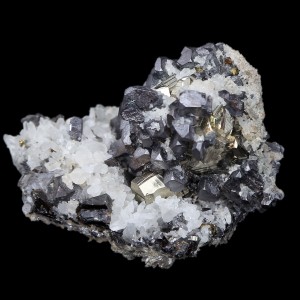 Silvery-black galena has been mined for lead and silver since the time of the Romans. It is the natural mineral form of lead sulfide and is the most important ore of lead and an important source of silver.

Sunny pyrite’s name comes from the Greek word meaning, “a stone which strikes fire”. It is often known as fool’s gold.

The mother of the quartz family which is comprised of silicon dioxide which is the second most abundant mineral in the Earth’s continental crust. Its a transparent rock crystal which holds all the color rays of the rainbow.

HISTORY, NAME, LOCALITIES: Galena has been known since antiquity and has always been the most important source of lead.  Its name is derived from the Latin galena, the Roman term for both lead ore and the impurities that float on the surface of smelted lead.  Galena is found worldwide with major occurrences in Peru, Mexico, Bolivia, Russia, China, and the United States (Missouri, Colorado, Idaho).

MINERALOGY, PROPERTIES, OCCURRENCE:  Galena [lead sulfide, PbS], pronounced gah-LEE-na, is the most abundant lead-containing mineral.  It crystallizes in the cubic (isometric) system as clusters of lead-gray cubes or modified cubes with a distinct metallic luster.  It has a Mohs hardness of 2.5, perfect cleavage in three directions, and a very high specific gravity of 7.4-7.6.  It occurs primarily in hydrothermal vein and replacement deposits in association with such minerals as quartz, sphalerite, and pyrite.

METAPHYSICAL PROPERTIES, LORE, USES: Romans mined galena to provide lead for elaborate plumbing and water-supply systems.  As the first semi-conducting material ever used, galena was the crystal in early “crystal-set” radio receivers.  Galena is the official state mineral of Missouri and Wisconsin.  According to modern metaphysical belief, galena is a grounding stone that aligns energies, stimulates smooth interaction with others, and opens pathways between physical and ethereal bodies.  As the primary source of lead, galena is mined extensively.

COLLECTORS’ INFORMATION: Galena is widely collected for its perfection of cubic crystal form and interesting composite associations with such minerals as quartz, sphalerite, chalcopyrite, and pyrite.

HISTORY, NAME, LOCALITIES: Pyrite has been known since antiquity.  Its name stems from the Greek pyr, or “fire,” alluding to its ability to spark when struck with metal.  Collecting localities are found in Peru, Italy, Brazil, Spain, Germany, Bolivia, China, and the United States (Colorado, Missouri, Kansas, Illinois, Kentucky, Idaho).

MINERALOGY, PROPERTIES, OCCURRENCE: Pyrite [iron disulfide, FeS2], pronounced PIE-rite, is the most abundant sulfide mineral.  It crystallizes in the cubic system as individual or clustered cubes, pyritohedra, or octahedra, and also occurs in massive, concretionary, and nodular forms.  It has a Mohs hardness of 6.0-6.5, no cleavage, and a specific gravity of 4.9-5.2.  Crystals are striated, opaque, and have a pale, brass-yellow color that tarnishes to brown.  Pyrite occurs in all mineralogical environments; the best crystals develop in hydrothermal veins in association with quartz, sphalerite, and galena.

METAPHYSICAL PROPERTIES, LORE, USES: Metaphysical practitioners believe that pyrite supplements physical energy with the energy of the sun, increases stamina, stimulates the intellect, and protects against negativity and risk.  It is a former ore of both iron and sulfur.  It now has only limited use as a coloring agent in the manufacture of amber glass.  Once a popular Victorian-era gemstone, pyrite still has minor uses in jewelry.

MINERALOGY, PROPERTIES, OCCURRENCE: Rock crystal is the transparent, colorless variety of macrocrystalline quartz [silicon dioxide, SiO2).  The word “quartz” is believed to have originated with the Slavic kwardy, meaning “hard,” in allusion to its substantial hardness.  It crystallizes in the hexagonal system and occurs mainly in hydrothermal veins, granite pegmatites, and as geode linings as short-to-long, horizontally striated, hexagonal, prismatic crystals with pyramidal terminations and distinctive, water-clear transparency.  It has a Mohs hardness of 7.0, a conchoidal fracture, vitreous luster, and specific gravity of 2.65.

METAPHYSICAL PROPERTIES, LORE, USES: Rock crystal has since antiquity been one of the most widely collected of all minerals.  It has served as a gemstone and ornamental stone in many cultures.  Until quartz was synthesized in the 1960s, rock crystal was vital to electronic frequency controls, filters, and timing devices. Modern metaphysical practitioners call rock crystal the “universal crystal” because of its numerous abilities to sharpen insight, enhance spiritual development, improve concentration, refine focus, and energize the mind.