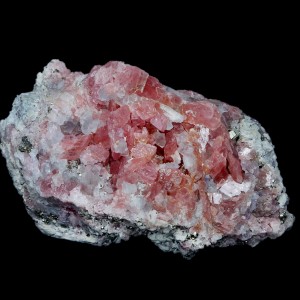 Rich pink to red in color, rhodochrosite, or manganese carbonate is a favorite among collectors. It crystallizes in the hexagonal (trigonal) system and most often occurs in hydrothermal veins in manganese-rich, metal deposits.

HISTORY, NAME, LOCALITIES: Rhodochrosite, pronounced road-oh-CROW-site, has been known since antiquity and was recognized as a species in 1813.  Its name stems from the Greek words rhodon, or “rose,” and crôma, or “color,” alluding to its diagnostic red color.  Important collecting localities are found in Argentina, Peru, Mexico, Germany, Romania, and the United States (Colorado, Montana).

MINERALOGY, PROPERTIES, OCCURRENCE: Rhodochrosite [manganese carbonate, MnCO3] crystallizes in the hexagonal (trigonal) system as transparent-to-translucent rhombohedrons and scalenohedrons, and also in compact, massive, and stalactitic forms.  It has a Mohs hardness of 3.5-4.0, a vitreous luster, perfect cleavage in three directions to form rhombohedrons, and a specific gravity of 3.4 to 3.6.  Its diagnostic pink or red color is caused by the essential element manganese.  Rhodochrosite is an uncommon mineral that occurs primarily in hydrothermal veins in manganese-rich, metal deposits in association with quartz and metal sulfides.

METAPHYSICAL PROPERTIES, LORE, USES: Rhodochrosite has at times served as a minor ore of manganese. Although too soft for use in jewelry, rhodochrosite is often faceted into collectors’ gems; massive and compact forms are fashioned into beads, cabochons, and decorative objects.  According to metaphysical belief, rhodochrosite aids in achieving spiritual and emotional balance, discourages avoidance and denial, and enhances receptiveness to new knowledge and experiences.  Rhodochrosite has no technological uses.

COLLECTORS’ INFORMATION: Because of its intense, red color and well-formed rhombohedral crystals, rhodochrosite is among the most collectible of all minerals both as individual and composite specimens, the latter in association with quartz and metal-sulfide minerals.