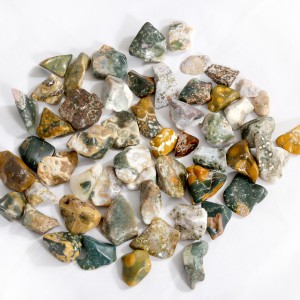 Gentle Ocean Jasper is a microcrystalline form of quartz that is also known as Atlantis Stone and Sea Jasper.

HISTORY, NAME, LOCALITIES:  “Ocean jasper” was discovered in the 1990s and named for its source on an ocean beach.  “Ocean jasper” is a trade name that refers to a specific type of orbicular jasper that is found only along the northeast coast of Madagascar.

MINERALOGY, PROPERTIES, OCCURRENCE: “Ocean” and other types of orbicular jasper have the same physical properties of other types of microcrystalline quartz.  “Ocean” jasper consists entirely of interlocked microcrystals of quartz [silicon dioxide, SiO2], is translucent to opaque, and exhibits a wide range of colors and color patterns.  It is a tectosilicate or framework silicate with a Mohs hardness of 6.0-7.0, a conchoidal fracture, and a specific gravity of 2.62-2.66.  Jasper occurs as nodules and lenses when colloidal silica suspensions lose their water and solidify into masses of microcrystalline quartz.  “Ocean” and other orbicular jaspers formed as silica nodules in highly silicified rhyolite or tuff.  In such environments, silica can crystallize in radial aggregates of microscopic, needle-like crystals that form patterns of multi-colored orbs.  While other types of orbicular jasper has other collecting localities, “ocean” jasper is found only along beaches in northeast Madagascar.

METAPHYSICAL PROPERTIES, LORE, USES: According to modern metaphysical practitioners, “ocean jasper” is a stone of power, protection, and love that balances emotional energies, enables one to focus on the positive aspects of life, and encourages relaxation and cooperation.  “Ocean jasper” is used as a gemstone and a decorative stone.

COLLECTOR’S INFORMATION: “Ocean jasper” is collected for its wide range of attractive colors and interesting and intricate orbicular patterns.