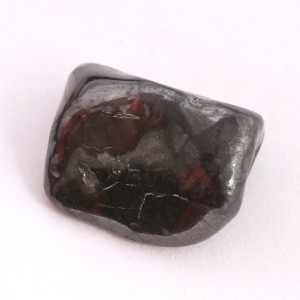 Shungite- Lustrous, black shungite is actually 98 percent carbon and is considered a mineraloid, (meaning mineral like but not officially classified as a mineral). It was first discovered in a deposit near Shun’ga village in Karelia, Russia, where it gets its name from. It is speculated that shungite is 2 billion years old.

HISTORY, NAME, LOCALITIES: Shungite, pronounced SHUNG-ite, has been known since the mid-1700s. It was named in 1879 for the village of Shun’ga in Karelia, Russia.  Small deposits of shungite also occur in Austria, the Democratic Republic of Congo, India, and the United States (Michigan).

PETROLOGY, PROPERTIES, OCCURRENCE: Shungite is a mineraloid (a mineral-like material that does not satisfy the definition of a mineral) that consists almost entirely of elemental carbon.  It is black, lustrous, opaque, noncrystalline, and somewhat similar in appearance to anthracite coal.  Shungite has a Mohs hardness of 4.0, a conchoidal fracture, and a specific gravity of 2.3.  The carbon in shungite originated either in ablated petroleum deposits or as migrated petroleum in the form of metamorphosed bitumen.  It occurs as layers, lenses, and veins within various types of host rock.  Shungite is believed to be the only natural material containing fullerenes (roughly spherical, hollow, carbon molecules consisting of dozens of carbon atoms).

METAPHYSICAL PROPERTIES, LORE, USES: Metaphysical practitioners believe that shungite is a powerful protective and cleansing stone. It is thought to bring ancient earth energies into play and absorb and to negate negative energies within the body.  Shungite has been used to purify water and as a medicinal compound, a black paint pigment, a water-filtration medium, and a lightweight insulating material.  It is also known to have antibacterial properties.  Shungite is shaped and polished for wear as pendants, especially for metaphysical purposes.

COLLECTORS’ INFORMATION: Shungite is collected for its rarity as a very unusual form of elemental carbon.