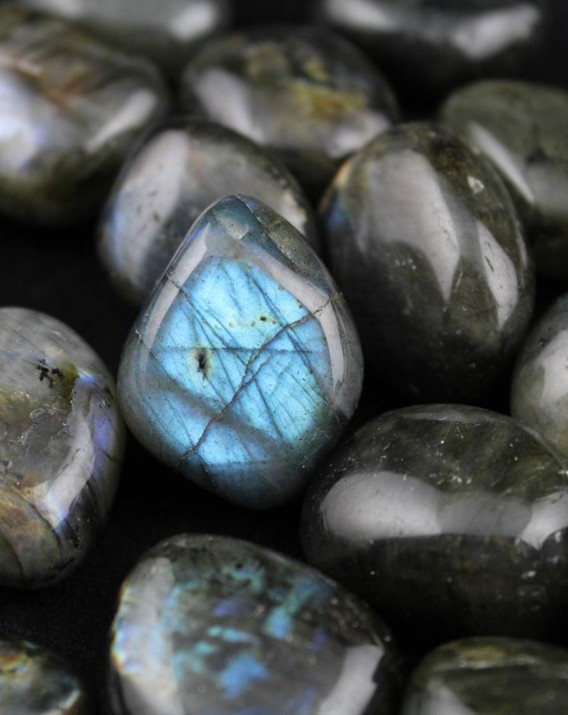 These beautiful pieces of  tumbled labradorite shimmer in the most amazing variety of colors.

Unique luminescent gray with green, blue and gold colors reveals the mysteries of our own inner knowledge, It is a plagioclase feldspar that crystallizes in the triclinic system.

HISTORY, NAME, LOCALITIES:  The labradorite variety of anorthite was first found in 1770 in Labrador, Canada, and is named for the place of its discovery.  Notable collecting localities are in Canada, Finland, Russia, Madagascar, Australia, Mexico, and the United States (California).

MINERALOGY, PROPERTIES, OCCURRENCE: Anorthite [calcium aluminum silicate containing some sodium, CaAl2Si2O8] is a plagioclase feldspar that crystallizes in the triclinic system, usually as compact masses of small, interlocked crystals and occasionally as large, platy prisms.  It has a Mohs hardness of 6.0-6.5, an uneven fracture, good cleavage in two directions, and a specific gravity of 2.70.  The labradorite variety of anorthite is usually opaque and dark gray in color, with a diagnostic play of green, blue, and gold colors, known as labradorescence, that is caused by light interference within reflections from twinned lamellae.  Labradorite occurs mainly as phenocrysts and compact masses in silica-rich igneous rocks.

METAPHYSICAL PROPERTIES, LORE, USES:  According to metaphysical practitioners, labradorite heightens intuition and provides a balance with intellect, enhances psychic abilities, protects against negative energies, and aids in recollections of memories and past-life issues. When cut and polished into large, free-form cabochons that display the attractive, optical phenomenon of labradorescence, labradorite is a popular and valuable gemstone that is worn mainly in pendants.

COLLECTORS’ INFORMATION: Labradorite is collected for its play of colors and value as a gemstone.